mindyourmind caught up with Mobile (sans Frank), after their show at Rock the Park. They talked about brotherhood, sources of inspiration and living, breathing, loving music!

At mindyourmind.ca we’re about people and connections to human behaviour and what we know is that people truly connect with something that’s authentic, that’s passionate and that’s real. Clearly you guys bring that. Now, the challenge is though, how do you keep that authenticity?

Mat: I think we have a natural bond, we’re 5 guys, actually there’s one missing, who broke his shoulder, should I say it again Frank? Riding bicycle and broke his shoulder. But you know, we’ve known each other for quite a long time, we grew up since like kindergarten, even before that. I think we have a natural bond and we’ve been through a lot even before we got a record deal, so you know, passion, the love of music, the friendship that we have together, I think it shows whenever we’re on stage and people relate more to that when they see like a band that’s totally together and we got a good start off the bat cause people could see that we were friends and the music was good as well, so I think a good combination of all of that.

How do you blow off steam, especially when you’re on the road?

Mat: We travel in a van, we don’t have a bus yet, so what we do is you know, we try not to speak to each other too much while we’re on the road. If we got something to say to each other at night, we try to wait till next day. That’s a good thing, we’re not obliged to speak and we don’t feel like obliged to speak if we’re not in a good mood, but actually we’re always in a good mood, but it’s just like some people like to read, other people like to watch T.V….

ML: So you guys are like an old married couple. Sit around, across from each other…

Mat: But in a good way, in a good way, we know that we don’t always want to be together, and maybe that’s a problem for other bands, they don’t have any privacy, because they’re stuck together, but for us, I really do love my privacy when I’m reading in the truck and someone’s watching a DVD and everything is perfect…like the perfect couple…haha

Dominic: We’re roommates too and if we don’t sleep together, there’s something missing.

Pierre–Marc: And every one has like their own room in the van….

Is there anything you MUST have? We’ve heard the strangest things, last interview we did, we were told that baby wipes were a must because they go days without showers and so baby wipes are the answer.

Pierre-Marc: Not here, because when you have a van like we have now, we have hotel rooms every night, so you can have a shower. When we had a tour bus like we had in Europe, sometimes you don’t have hotel rooms, so you could go 3 days without a shower.

Mat: Well, I think in Montreal, we all had day jobs, we went to school, so the band was kinda part time and we really wanted to achieve this career and we had that in mind and it was impossible for us to do both , you know having the band and having a day job. One day, Christian came to rehearsal and we all said we had to make a move, and we said we should go somewhere else, you know, let’s go to New York or Toronto . New York was too expensive so we decided to go to Toronto instead and regroup and only think about music. We sold everything in Montreal and left everything behind and we moved into a 2 bedroom apartment, the five of us together, in a very dirty 2 bedroom apartment. Actually we never invited people over cause it was too dirty. (laughter)

Pierre-Marc: Everyone says that Montreal is the place to party and that Toronto is more like a business, but actually it’s the opposite because we went to Toronto to make the band happen. We had to go out almost every single night and meet people and there’s more Rock ‘N Roll in Toronto than Montreal. Thing is when you start a band there’s a serious side as well, like you can party but also, you gotta be ready for what’s gonna happen cause a lot of bands want a record deal but they don’t know what’s gonna happen after that. You reach that level but then you get a record deal and there’s twice as much work that’s ahead of you so you know, you gotta record the album and go on tour. You know, we haven’t been home in like 6 months almost. It’s great, we enjoy it, but it’s kind of a working schedule at the same time.

ML: I think that’s a huge misconception, you know, that it’s all partying, no one really gets just how much work goes into.

Mat: Well and we play every night. We’re not a shoe-gazer type of band, we don’t stand still on the stage, we’re really passionate, there’s a lot of energy going on on the stage, so if you’re hungover, like six nights a week…

As a group you practice, when you practice to prepare for a live audience, is there anything that still makes you nervous on-stage?

Mat: Tonight, yes. We’re missing our guitar player cause we’re stuck doing a show with the 4 of us and Christian had to change his guitar parts and I had to take over on guitar as well and you know, you just feel like there’s a presence missing on stage, especially us, cause we’ve played together for so long, we miss his presence on the road and on stage and after the shows and everything. Frankie’s gonna love me for this…

What was it like making your first music video?

Christian: It was fun. Actually the first video was ‘Montreal Calling’, so we shot it in Montreal, and it was a really good experience. All 3 videos that we made were great. The 3 of them were different too, uh, it was really cool, special, but I would say the 3 of them were really different and my favourite was the last one, ‘See Right Through Me’.

Mat: There are a lot of things that have to you know, well, first of all, you have to be really good mates with your band, its really important, and be passionate about the music cause the music’s the most important thing, but then there’s the business side as well. So the way we work in our band is he takes care of the music, I write the lyrics, they take care of the business side. You really have to be aware of business as an artist in the music industry. People, you know, you think it’s cool, you sign a record deal or whatever but you gotta be conscious, you need a good manager, you need a good agent, you need a good record company that’s not using the band. I think the most important thing is not saying “I don’t wanna sign with an Indie or a Major” because that makes no sense, you have to work with people that believe in your band and we’ve always been careful about that. We took our time, made sure that we’re ready to put on a good show and ready to make important showcases for our record company and then it goes on and on and on. It never stops cause it’s Canada and the States, Europe, Australia, Japan and you gotta make sure you’re surrounded by good people, it’s really important.

I read somewhere that you rehearsed for 3 years before doing a show…that’s pretty remarkable, I don’t know if a whole lot of bands can say, that they’ve practiced for 3 years, 4 days a week. Are you perfectionists?

Last question I guess, what inspires you?

Mat: Everything. When I was really young, I was captured by bands, so I knew at a really young age that I was going to be in a band. We were like 12 years old spending night after night playing. That’s all I had in mind, that’s still what I think about, even when I’m home. I think about the music. I’m cursed in a way. 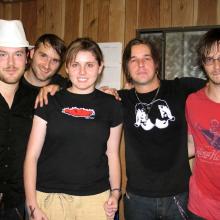 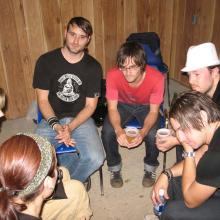