As London, Ontario is gearing up for their second Black Lives Matter “Peaceful Protest,” I wanted to share some insight into just how peaceful the first one truly was. In addition to doing my due diligence as far as the health unit’s recommendations regarding COVID-19, I also wanted to do as much reading as I could on how to appropriately participate as a white person striving to be a better ally. Luckily, there are more resources and tips available than ever before. I was able to gain some helpful insight that would guide how I took up space in this movement being led by and for Black people, in our local community and beyond. Even still, I wasn’t quite sure what to expect or what to be prepared for.

It turned out to be even more peaceful than I had predicted — though it’s important that I note it is also not up to me (a white person) to judge or decide how Black people protest, and it is completely understandable and valid for them to express their anger and pain, in ways that may not appear peaceful, after years and years of injustice. However, this example in particular is about the experience I had at the protest that was marketed as “peaceful” and how it was exactly that!

In fact, an incredible example unfolded right in front of my eyes while everyone was still gathered in Victoria Park and listening to the opening speeches. A white man, one who was unfortunately unsupportive of the event and movement, had been walking throughout the crowd holding a sign with something to the effect of “systemic racism doesn’t exist here.” The second time that he walked through the area in front of me (about 20 feet away), a second white man had reached for the sign to get rid of it. Within seconds, a physical altercation was unfolding, and as soon as the people within this 20-30 foot radius noticed, others intervened. One ally right behind me started chanting “peaceful,” reminding even the second white man (whose intentions were probably good in wanting to stand up against the sign) that the focus of today was to be peaceful and that two white men becoming violent was the absolute last thing needed here. Soon there were collective chants reinforcing peace or “no violence”, and the physical altercation was deescalating. However, people were still quite worked up and chanting “go home” to the man who was instigating the conflict with his sign, and it appeared that he did eventually remove himself from the crowd.

It felt like just seconds after the “go home” chanting began, something was said by the organizers on stage (but we couldn’t quite hear what it was from where we were) — we didn’t need to hear it though, because suddenly we could see everyone taking one knee to the ground and holding a fist in the air. Within moments, thousands of us could be seen taking a knee and using this moment to remember why we were all there: to fight for peace, for love, and for justice for our fellow humans. It was an incredibly powerful moment that I will never forget. Here’s to hoping that this weekend’s peaceful protest is also exactly that.

Scarlett has been volunteering with mindyourmind since 2012 and has been a member of the staff team since 2016. As a Psychology graduate from King's University College at Western, she is passionate about all things related to the subject and is a proud mental health advocate with lived experience. 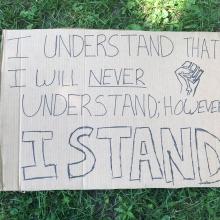