I’ve been doing this geek thing for a while now. Since high school, I’ve been associated with the subculture in one way or another, and back then it still wasn’t cool yet. However, one thing I’ve never tried is cosplay. It’s always intrigued me, but it’s always just been something “other people” do that seemed so challenging and inaccessible to me. I’ve dressed up for Halloween, but that was normal, so no one could question it. This year is different.

Last Halloween I decided to go all out. Really I just wanted to splurge a little, so I hopped onto my favourite shopping website (I won’t name names, because they don’t need the free promotion) and picked up a discounted costume for Kirigaya Kazuto, aka Kirito, from one of my favourite anime series, Sword Art Online. Turns out I was sick on Halloween, so I stayed home, but I had this expensive costume anyway and didn’t know what do with it. Luckily, November first was Japan Day at my University and since I was a third year Japanese student, I was basically voluntold to help out with it. So, I threw on my costume and wore it with me to school that day. It was a little weird going to my morning history class in it, but no one said anything, so either they didn’t notice or they were too shy to ask me what was going on. The costume proved a big hit at the event though, even though it was incomplete and the swords I ordered hadn’t arrived yet. Quite a few people recognized me (they were going to Japan Day, after all, so most of them watch anime) and I got a few compliments, including one of the Japanese teachers calling me “kakkoii” (handsome).

Then I decided to make some changes. I ordered boots that were too small, so I frankensteined their buckles onto a pair of boots I already owned, which I painted black and silver to look more authentic. I upgraded the gloves, belt, pants and shirt to all be better quality and got my awesome Mom to help me sew more details onto the jacket. Then it all sat in a closet for several months.

Finally, this month an opportunity came up for me to wear it again. Niagara Falls Comic Con was happening back in my homeland of the Niagara Region, Ontario. NFCC started about ten years ago as a free one-day event in a hotel ballroom and has since boomed into a multi-day event drawing some of the biggest names in the world in comics, wrestling, movies, TV and general geekdom, so I decided I’d go as Kirito. I didn’t know what to expect. I had been to Fan Expo in Toronto a few times, but for one excuse or another, I had never made it to NFCC before and I had never done cosplay at a convention before, so I was very nervous. Luckily, I had a support system. My friends Amy and Nick have been there for me during some of my darkest times. Last winter I had a pretty rough night when a girl I was meeting for a first date went to the bathroom and then disappeared forever. I called Amy and she and Nick came right away to come help me during a time when I was feeling abandoned and broken-hearted.

This time, Amy and I were supporting each other because I was so nervous to walk around in a full get-up that would basically draw attention to me whether I wanted it or not and she was nervous about meeting Cary Elwes from the Princess Bride, one of this year’s NFCC celebrity guests. Well, unfortunately, for reasons unknown, Mr. Elwes’ appearance was cancelled. Still, Amy and Nick showed up and supported me nonetheless. To my delight, it was an incredibly positive experience. At worst, people didn’t know who I was, so they just left me alone and at best I got a few people shouting “Kirito!” and some lady from across the street telling me mine was the best costume she had seen all day as I was walking back to my car. The highlight of the whole day, however, came when I spied a young mother dressed as Kirito’s girlfriend, Asuna, and her son dressed as a tinier, cuter Kirito. I waved and said “Nice costume!” from across the room and his face lit up. It was that moment that made it all worth it.

Other highlights of the weekend were getting (paying more than I should for) a picture and autograph with Guardians of the Galaxy Vol. 2’s Pom Klementieff, aka Mantis (who was actually very sweet and recommended a French director to me when we met at her celeb table), finding a vendor that sold the best vegan fudge I’ve ever tasted and seeing the guy who played Short Round in Indiana Jones try to woo a shy toddler dressed as Belle from Beauty and the Beast.

So, during this Pride Month, I’d just say if you’re nervous or anxious about expressing yourself, don’t be. Not everyone will understand you or, in my case, know who you are (someone thought it was from Assassin’s Creed, which is a good guess at least), but it’s better to be yourself and have fun once in a while than to hide because you’re nervous. You might have a metaphorical cosplay in your metaphorical closet. Dust it off and show it to the world.

I’m already starting to plan my costume for 2020. No spoilers though.

If you or someone you know struggles with social anxiety, mindyourmind is loaded with helpful tools. Don’t be afraid to reach out for help when needed.

David is a former intern at mindyourmind. He is a mature student currently in his second year of East Asian Studies at Huron University. He speaks English, Japanese, terrible, broken Spanish and a few basic phrases in Mandarin Chinese. A lover of anime, fitness and weird music, you can often find him working out at the gym or blasting some random band through a pair of headphones (or both). He loves travelling and has lived abroad twice, in Taiwan and Colombia, and hopes to go study in Japan next year. David has Autism Spectrum Disorder with depression and OCD and he hopes to spread the word to Canada’s youth that they are not alone. 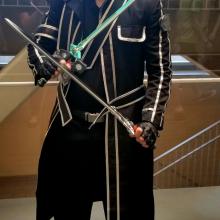