Pets and anxiety: how my dog made me like people again

It was only a matter of time before I blogged about my pets. Anyone who knows me in the least expects a daily remark of some sort or wild story that seems so much cuter to me than to anyone else. For example, in the office this morning someone asked about trick-or-treating this year. Some said they were going out themselves, others said they were taking their kids, and of course, I let everyone know that I’m taking my pug Milo out for his annual devil costume stroll through the neighbourhood. Every once in a while I wonder whether I could be this enthusiastic and proud one day about my kids as I am about my pets and, I admit, I seriously doubt it.

Anyone who has a pet knows what I’m talking about. There’s something that makes them better than human companions in so many ways. They are more loyal than anyone you will ever meet, they make us laugh about every hour at minimum, and they live in the moment one hundred percent. There are countless stories about the benefits of pets on one’s physical health, from therapy dogs in hospitals to cats recognizing disease before their owners come to the realization on their own. We can tell that our pets are good for our moods from the way we feel around them, but how far can it stretch?

Before my family got Milo my depression was severe and my self-esteem was even worse. As a result, I isolated myself almost to the point of being a complete recluse. When I heard that my family was talking about getting a dog I didn’t think it would work out – nothing ever seemed to work out anymore – but after I saw how much my sister wanted one I fought for it for her sake. A week later my parents were at work, my sister was at school, and I was home alone with a ten-week-old puppy that had a heart murmur. He was the last one of the litter to leave his mom due to his health and was used to a LOT of cuddling. I had strict instructions from the breeder to continue the nurturing he was used to (minus the breastfeeding!). Being the caretaker I am, I took these instructions very seriously.

While having a puppy was a lot of work, I soon was completely invested in our little puggy. My mom and I took him to training classes where he was the star of the class. All the other dogs would sniff around and bark and get into trouble while Milo would sit and stare at the teacher as she talked. He was a complete dream to train and I couldn’t have been prouder! Soon, the harsh winter snow melted and we walked Milo through our neighbourhood. We’d just moved in the year before and hardly knew anyone, but everyone wanted to meet our pug puppy.

Up until then I was terrified of meeting new people because they always asked me what school I went to or what my job was and since I was neither in school or working I felt like a huge failure. The best thing about meeting my new neighbours with Milo along was that they didn’t have any interest in me anymore, just Milo! I was so in love with my little dog that I was eager to talk about him to anyone who would listen.

One day after saying good-bye to a fellow dog walker, my mom said, “I know that you’re pretty anxious around people, Erin, but when you talk about Milo you know what to say to people before I do. And you have a real sense of humour!” I brushed off her compliments initially but they did make me aware of a change in myself. Over time Milo was teaching me that I actually did have social skills and I wasn’t a complete moron. My newfound interest in dogs lead me to a local “pug meet” where I met the organizer of Pugalug Pug Rescue in Toronto. Before I knew it I was volunteering for them, making buttons and helping organize more pug meets.

I wish I could take Milo everywhere with me like a seeing eye dog because his presence reduces my anxiety tremendously. I’ve learned that pretty much everyone loves pets, however, and so it’s a great conversation starter with people I don’t know well. And if they don’t like pets, they do like laughing along with me at how head-over-heels I am over my dog.

If you have social anxiety, diagnosed or not, think about your favourite things to talk about. Maybe it’s a sports team or a favourite tv show. Try and find people with the same interest and I guarantee you will start to feel more comfortable around others. Sometimes we can feel like there’s something wrong with us when we just aren’t in our own element so give yourself some credit for your passions and trust that they will lead the way to some happiness in your life. Even if you are still wary of others, hanging out with a pet can teach you that you are lovable after all.

Erin Schulthies is the writer of Daisies and Bruises, a blog about "finding her way one step and one word at a time". After losing most of her youth to severe depression, she decided that since death was no longer an option, she had to find a way to live. This is it. 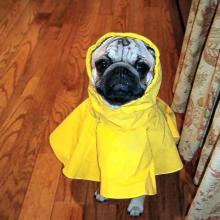