This past year has been extremely overwhelming, to say the least. Specifically, as a young woman, the last few months have been emotional and tiring. About a month ago, I found myself feeling very overwhelmed. During the week that marked one year since the murder of Breonna Taylor at the hands of a Louisville police officer, the week that news of 30 year old UK woman, Sarah Everard’s murder was confirmed and released, and the week of the horrific Atlanta Spa Shooting which left six Asian women dead, I was left feeling sad, outraged, scared, and uncertain about how to process it all.

I thought back on the endless instances of “hey sweetheart, give me a smile,” of hands around my waist, of looking over my shoulder, of asking a friend to watch my drink while I go to the washroom. I thought about how it feels to be a young woman in a public space, something of someone else’s interest, something to be watched, something to be grabbed. I thought and I decided to create a visual representation of those instances and the feelings that come along with them.

My hope was to create a piece that succinctly illustrates how it can feel to simply walk outside as a young woman, to depict the experience of being an object of fascination rather than an individual, and to convey the sensation of faceless eyes and hands on one’s body. This piece is created in solidarity with the 97%. 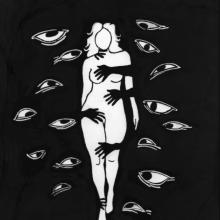 This is a place to see shared stories and experiences submitted by young people. It represents the truth of the people who submitted their stories.