To celebrate PRIDE month, the mindyourmind team wanted to highlight the stories of the diverse and inspiring people that make up the LGBTQ+ community. In many ancient cultures storytelling was not only a way to entertain but it was a way to pass on history, values and provide meaning to the listener. It was a way to learn from the past and the journey of others to better understand yourself and where you come from. Just like the stories of the past this interview is meant to give you a glimpse into one person's experience navigating themselves and sharing their journey, challenges and triumphs to become their authentic self.

Tell us a bit about yourself and your journey?

I have been a member of the LGBTQ+ community from before I understood what that meant. I remember being three years old and thinking that I was a boy. It was what made sense to me and my body. I constantly wanted to run around in shorts and no top on, even when I was supposed to dress "properly". I also hated dresses and would cry when I had to put one on. It was as if I had an innate fear of dresses, or adverse reaction when I had to wear a dress for church or family photo day - I can't explain it, I simply detested it. I would always be teary eyed making my way to the Sears photo studio with my family who had tried so hard to get me into beautiful velveteen dresses and frilly frocks for a wholesome family photo. As I grew up and developed, I wanted to be a boy, so I would do things like stuff socks down my pants and go to school. I felt I was relegated to being a lesbian, even though that was not how I identified, though it seemed to be the closest thing that people could understand in order to make sense of me in the world. I was a tom boy growing up and would be described as a butch woman. I remember my Aunt Bernice used to say to me, "I have a granddaughter just like you". It was this unspoken way of acknowledging, "we know you are different" without saying gay, or lesbian, or trans. Also, bear in mind that I came of age in the mid-1990s in Thunder Bay, Ontario, so knowledge of HRT and sex reassignment surgeries and procedures were little known at that time. I remember watching an episode of Sally Jessy Raphael where a transman who came out on television to his friend. The friend was shocked and walked out on the transman during the episode as he felt lied to and betrayed. This was one of the first times I remember thinking there were people out there like me, and also that I was desperately afraid of them due to my own internalized homophobia and transphobia at the time.

When I was 27, and in university at Western in London, Ontario, I "came out" for the first time as having feelings of gender dysphoria and acknowledging that I may not, in fact, be a lesbian, but a transgender person. It was to my friend Christine at a park downtown and it wasn't again until 8 years later that I finally took steps to transition from female-to-male when I was 35 in 2015. There is so much shame, guilt, pain and repression that I experienced, and that I know many others cope with on a daily basis as well. By the time I came out as trans I was already fully out as a lesbian among my friends and colleagues. However, embarking on a journey to be honest with myself and own who I am as a transgender person took a long time to come to fruition for me. I am still awaiting top surgery, but have been on HRT since June 21st, 2015 - summer solstice, which was symbolic for me. In university, I studied transgender employment discrimination and the everyday trauma of queer life. I advocate regularly for LGBTQ+ issues and have sat on panels discussing transgender identity in Canada's healthcare system.

One of the most important pieces of advice or encouragement I received was when I worked at Free The Children (now WE Charity). When I worked there in 2015, I had to come out to the whole organization - this was over 500 people. So, my manager reviewed a letter I had drafted and it was circulated among employees. Our staff was incredibly supportive and, with everything, there were mixed feelings and some folks that steered clear of me after the announcement. Which, I suppose, is part of the process. Immediately after sending the letter I received a phone call from Renee, an career coach who worked in the HR Department. She immediately asked if I would have a coffee with her, so we went down to Scullery and had a coffee. She told me a very personal story of her own journey of living in Europe for over 5 years at a convent where she was practicing to become a nun. After many years of devout faith and spiritual practice, the Mother Superior invited Renee into a meeting where she plainly asked her why she was there. Renee burst into tears and realized that this was not the calling she was meant to fulfill in her life. She then told me how difficult it was for her to come back to Canada and to face the expectations of those around her who expected her to live a devout religious life and to come to terms with a new direction. She said, "you have to meet people where they are at". And, I never forgot that. It is advice that is sound, not only for meeting others, but also for compassionately and empathetically meeting yourself where you are at in your own journey.

This single sentence - resounding with pitch and gravity - was instrumental in allowing me to let go of things from the past and to move forward in my own life, in what finally felt to me to be coming (or "becoming") into myself and my body. I can sincerely say that as a transman I have never felt happier. And, while life is never perfect, I feel more at home in by body than I ever have before. For youth who may be reading this, accept and love who you are and meet yourself and others where they are at. It is all we can do to meet in communion and move forward as people and society without the shackles of guilt and shame.

What is one obstacle you faced on your journey and how did you overcome it (or how are you overcoming it)?

One obstacle I have faced is letting go of past hurts and traumas in order to move forward in a healthy emotional way. I think, sometimes - as I most certainly did - we tend to hold on to our stories and think that if we don't relive them and re-experience them they will not be part of who we are, or we will lose ourselves. So, we hold on tightly not wanting to lose who we are. And, I have found that I don't have to continuously tell my story and "live" in my trauma in order for my story to be true. My story is true. I have walked this path. I found that my brain patterns would constantly make panic attacks, depression and anxiety a part of daily life. I have been in consistent therapy since 2010, and I would say it has been instrumental in allowing me to explore how trauma lives in my body and how I can manage it. For me, meditation, healthy eating, sleep and creative outlets have been fundamental to my progress. Also, doing cognitive work to help make new neuro-pathways in the brain helped me transform obsessive and negative thinking. It also helped me build awareness of, identify and replace the thoughts of others that I had internalized and made my own over the years - messages like "I am not good enough", "I am a loser", "I will never do it". It's so insidious how these messages become a part of who we are without us even truly knowing what is happening during early stages of development when we are simply learning and absorbing how to be in the world. And, often times, we are taught these things by other people who have been hurt and damaged themselves by others as well. It is a great feat to take care of yourself in today's world, and anyone who ventures down the path of self healing, self discovery and self love will set themselves up for great success in their lives. If you can do this - you can do anything! (<<< definitely got this from my therapist, but she's right!)

How do you practice self-care and/or where do you find support during tough times?

Friends are extremely important to me and my inner circle has been super supportive. I think finding good people to surround yourself with, who have your best interests and care about you, even if that means tough love, is important. And, while I struggle with self-care I remind myself "back to basics" when things get really hectic or I am unable to care for myself effectively. So, healthy, regular meals, exercise (I like swimming, walks and boxing), and sleep is critical. And, I also spend time painting and drawing, playing music and writing. These practices help me feel grounded and centred to approach life. Also, meditation and mindfulness are quick and easy ways to put things in perspective and calm down when I need it.

What is something that people would be surprised to learn about you?

People may be surprised to learn that I am a trained actor and I studied in New York at the American Musical and Dramatic Academy and the New School University. I really love to act. To me, it is a way to get at the heart of the human condition and to express and reify our very humanity. And, though I haven't done it in a while, I hope to get back into it!

Thank you for reading our interview series and taking the time to learn about some of the amazing members of the LGBTQ+ community. Visit mindyourmind.ca often and check out some of our other amazing blogs, interviews, information and resources.

“Find out who you are and be that person. That's what your soul was put on this Earth to be. Find that truth, live that truth and everything else will come.”  ~ Ellen DeGeneres 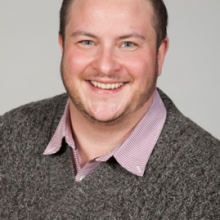