To celebrate PRIDE month, the mindyourmind team wanted to highlight the stories of the diverse and inspiring people that make up the LGBTQ+ community. In many ancient cultures storytelling was not only a way to entertain but it was a way to pass on history, values and provide meaning to the listener. It was a way to learn from the past and the journey of others to better understand yourself and where you come from. Just like the stories of the past, this interview is meant to give you a glimpse into one person's experience navigating themselves and sharing their journey, challenges and triumphs to become their authentic self.

Can you tell us a bit about yourself?

I’m not great at “about you” blurbs, but let’s try: I grew up in rural midwestern Ontario, towards the Bruce Peninsula, but moved to London (Ontario) for university. I graduated with my bachelor’s degree in psychology, and ended up sticking around in London afterwards. I started volunteering with mindyourmind when I first moved to London in 2012, and then became an employee in 2016. I’ve recently returned to work — both at mindyourmind and my other job as a youth mental health worker at an all-girls therapeutic care residence — after a six month health leave where almost five of those months were spent in the hospital for inpatient treatment. Here’s to hoping that one of these days, I won’t have to learn the hard way that this is the likely outcome when I let tending to my mental illnesses sit on the backburner. I am gradually working on navigating and juggling life with chronic mental illness in a way that is manageable for where I’m currently at. Part of trying to manage my illnesses this time around has involved a lot of introspection, tearing some mental walls down, and realizing the importance of vulnerability and speaking my truth — which all led to the “event” that prompted this interview!

You recently “came out” on your social media accounts. What did you share with everyone?

To be brief, I shared that I’m not straight/heterosexual and identify as queer (which I elaborate on more in my recent mindyourmind blog)!

Can you tell us how you came to the decision to share about your sexuality?

It’s been playing on my mind for a while now, but as I was making plans this past month to attend Toronto Pride for the first time, I started to more seriously consider it. I just felt like I needed to have that weight lifted in order to make the most of the experience, and to feel like I could be more present and “myself” there. It has taken several years just for me to accept it, and I felt too tired to continue carrying the burden of hiding it from so many people. I’m doing a lot of heavy work in therapy right now, and this felt like one of the easiest ways to lift one part of what has been weighing on me. I still struggle somewhat with the self-acceptance piece, and maybe I always will, but at least with my professional supports, some amazing supports in my personal life, and a lot of self-reflection, I reached a place where it felt like it was time to really open up about this part of me.

What was the response from people in your life?

So far, I’ve been lucky to have most people respond really positively. I think for a lot of young people it feels like one of the biggest hurdles is coming out to our parents/caregivers, so it was really hard not to have my mom alive while I’ve been navigating this the last few years (especially because she’s the person I would have told first and then would have had her tell everyone else for me, whoops haha), but I’m beyond thankful for how accepting and supportive my dad was when I came out to him last summer. It’s not exactly a typical father-daughter topic, so it wasn’t easy to open up to him about this, but it went better than I could have imagined! It truly breaks my heart that many young people don’t have support from their parents or caregivers after coming out, so as hard as it has been to not have my mom through this, I try to remind myself how lucky I am to even have one living parent who has been supportive about it. Cool little tidbit: when I was visiting home last month, my dad actually asked me if there were any girls I’ve been seeing that he should know about, and I can’t even express how much it meant to hear him ask that so openly. I genuinely never could have imagined that would be something he would say. Times are slowly, but surely, changing and I think sometimes we might underestimate the ability of the older generations (well, where I live, generally speaking) to become more open-minded. I think it might have helped that my dad and I have already been through a lot together, so this was probably not the worst news he was expecting. However, I do see my privilege in this and I know that, unfortunately, a lot of young people may not have this outcome with their parents/caregivers. In this case, I recommend first talking it through with someone who you know will react positively, so that you have their support if it doesn’t go well with a family member/someone else that you’re worried about coming out to.

What would you say to someone who isn’t sure if they’re ready to “come out” to the people in their lives?

I actually had a conversation with someone about this the other day. In short, what I said to them is basically that their sexuality and identity are valid whether they decide to come out or not. You don’t owe it to anyone to come out, and at the end of the day it’s really about how you think it will make you feel. If you are wanting to come out eventually, know that once you ride through the initial anxiety, it can feel like a huge weight is lifted. I never realized how heavily it really was weighing on me until I finally decided to let go of it. There will likely always be someone who doesn’t approve, but I hope you know that you aren’t alone and there are people who will love you no matter what your sexual orientation or gender identity is.

Are you dating anyone? Or who would be your ideal partner/relationship?

I’m not in a relationship currently, no. Some of the things that come to mind when I think of an ideal partner would be a gal who shows understanding and patience when it comes to mental illness, is open-minded and compassionate in general, likes to have fun but is also cool with quiet nights in, can be serious but also silly, is honest and loyal, and supports how important it is to me to spend time with my loved ones! Oh, also someone who can put up with my incessant Michael Scott/Office references. Hopefully that isn’t setting the bar too high, haha!

You recently attended Pride festival in Toronto. What was that experience like?

It felt really freeing to be surrounded by so many people (I’m talking thousands upon thousands) who were either allies or LGBTQ+ themselves. I was also really surprised that I didn’t see anyone spewing anti-LGBTQ+ hate speech or protesting! The only other place that I’ve attended a pride parade was in London (Ontario) and, both years that I went, there was a group of religious protestors/people yelling or holding ignorant, hateful signs. Toronto Pride, however, was incredibly peaceful in my experience. It was really nice to feel so safe and accepted for the entirety of our weekend there! It was also really cool to see people of all ages taking part. There’s just something about seeing elderly people and folks with their kids that really makes it feel like a community. I agree that we aren’t where we need to be in terms of representation, but it was really good to see the overall range in people of various races, religions, cultures, and abilities, participating in and attending the festivities.

Do you have any advice or thoughts to share with someone who is questioning their sexuality?

I guess my advice would be to let yourself step out of your comfort zone (as long as it’s safe, of course). Allowing myself to explore non-heterosexual dating and relationships felt somewhat foreign at first, but it also felt liberating. This analogy isn’t flawless, but think of it like learning to swim: if you grew up in a society where swimming was taboo or just not commonly talked about, it’s going to feel weird and unnatural if you eventually decide to try. Maybe you truly aren’t meant to swim; on the other hand, if something keeps drawing you back to the water then maybe you just need some time to figure it out. The fact that it feels foreign at first doesn’t mean you should have to stay on the shore for the rest of your life. Yikes, that was cheesy, but hopefully you get the point: it may feel uncomfortable initially, but that doesn’t mean it’s wrong. For a bit more of my story on navigating my sexual orientation, you can check out the blog I wrote about it here on mindyourmind.

A huge thank you to Scarlett for sharing with us about her journey, great tips and advice. We really appreciate it and look forward to seeing what great things happen for you!

Check out the four previous interviews of this Pride series with amazing local LGBTQ+ community members in the Interviews section on our website. 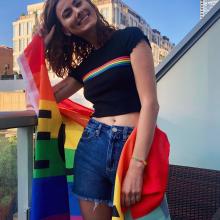